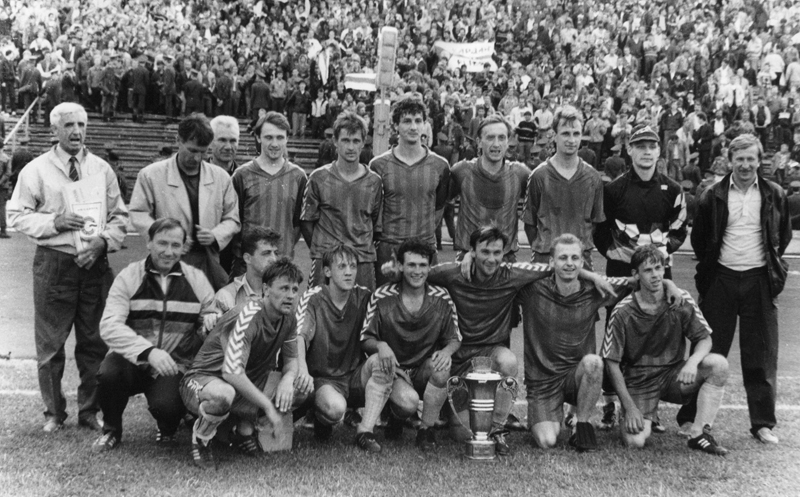 During its existence, only one of the football tops submitted to the Grodno club – in 1993 the yellow-green became the owners of the Cup of  Belarus. Nine years later, the team was a step away from winning the national championship, but in an additional match for the title of the champion Grodno lost 0:1 to Borisov BATE.

It is considered to be that the year of foundation of the club is 1964. It was the year when our team was admitted to the Union-scale competition. «Neman» became a full member of the «B» class, which was the third division of the USSR championship. Before the appearance of the Republic of Belarus on the political map of the world, the Grodno club held 28 seasons in the USSR championships, two of which the team played in the second division. In 1967 the team under the leadership of the head coach Vadim Radzishevsky became the second in the 1st Zone of the RSFSR, after which the semifinals of the Union republics followed, and then the final, having won, «Neman» went on promotion.

In 1968 and 1969, «Neman» acted in the second most powerful division of the country, which at that time was called «Second Class A». Then our team has achieved the best result in the championships of the USSR. Despite the fact that the most successful season was the season of 1969 - the team took the 14th place out of 21 in its subgroup (Second Group A, Pogroup 4), because of the reform of the USSR championship structure, Grodno left the second division and did not return there, although were close to this in the early 80's. The conditional achievement was the position of 73-76 of the country's team.

However, if we take into account the highest club achievement in the second league (D3) in 1980 – the first place in their zone, than the second place in one of the three groups of the promotion tournament – the highest position of our team will be 46-48 in USSR.

In the USSR Cup, the situation with determining the best season is easier. In the 1986/87 season the Grodno «Khimik», led by Vyacheslav Sivakov, reached the 1/8 finals, where he lost 3:4 to the Simferopol «Tavriya» and was eliminated from the further struggle. Our offender in 1/4 finals, after a goalless confrontation, beat the representative of the top division Kharkiv «Metalist» on a penalty shootout, and in the semifinals lost to the Minsk «Dynamo». As a result of this season, our team was among the 16 best teams in the USSR.

After the collapse of the Soviet Union, Belarus began to hold its football competitions. Grodno «Khimik» from the first sovereign championship acts in the strongest division of Belarus and during this time only once could rise on a podium. The best achievements were the silver awards of the team of Siarhei Saladounikau in the 2002 Belarus Championship. Four times the Grodno residents were stopped in a step from the bronze medals, taking the fourth places in the championships of 1992/93, 2000, 2001 and 2013.

«Neman» in the championships of Belarus...

True victory we had only one, although before the final of the Belarus Cup the team got three times. «Neman» became the owner of the Belarus Cup in 1992/93, when in the final he beat «Vedrich» from Rechytsa 2:1. The head coach of the winning team was Stanislau Ulasevich, and the captain's dress belonged to Siarhei Saladounikau.

The Cup victory of 1993 allowed the Grodno club to become the second team of our country, which had the honor to play in UEFA competitions. Since then, «Neman» started four times in European cups, but has never been able to advance further than its first round. The opponents of our team were the Swiss «Lugano», the Romanian «Steaua» from Bucharest, the Czech «Tescoma» from Zlín and the Icelandic «Fimleikafélag Hafnarfjarðar» from the Hafnarfjarðar.